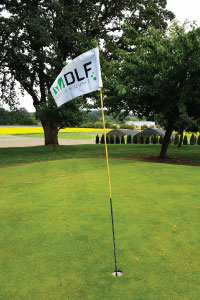 DLF Pickseed is the US branch of a global seed and plant breeding company adding value to customers and end users through leading edge research and product development. DLF Pickseed employees are characterized by a high level of competency, passion and commitment. Together with an entrepreneurial mindset and a flat organization, this contributes to DLF Pickseed’s unique agility.

What does DLF stand for?

DLF was founded in 1906. It was originally Danske Landboforeningers Frøforsyning, which translates to the “Danish Farmers Organization’s Seed Supplier”. It was – and still is – a coop, which means DLF is owned by Danish Seed Growers, the contract seed growers of DLF. When paying the DLF seed growers, 2 percent of the payment is deducted into a fund, where it stays for six years and then is released to the seed growers with interest. The connection to the farmers organization was active for many years, and the farmers local extension service earned a commission when they recommended DLF seed to their members. This structure was closed down some years ago, the connection to the extension service was cut, and DLF was transformed to Dansk Landbrugs Frøselskab, which translates to “Danish Agriculture Seed Company”. The original structure of the DLF coop is still strong. About 3,000 Danish Seed growers are coop members in DLF and their strategy has been to develop DLF, being able to follow a growth strategy while producing seed has been an attractive activity for the members. This strategy has made it possible to build up a capital in DLF, being strong enough to complete the acquisitions of Pickseed, La Crosse Seed, and latest PGG Wrightson Seed. The owners – the 3000 seed growers – elect 150 representatives or delegates, who are assembled at the Annual Meeting on the last Tuesday in October. They elect the 9-member Board of Directors in DLF AmbA , who are the bosses of our Management, headed by CEO Truels Damsgaard.